SOME FAST FACTS ABOUT CASTOR OIL

Castor oil is a translucent liquid with a yellow tint. It is an active ingredient in a wide variety of household items, from cleaning products to paints.

Amazing Castor oil is a vegetable oil pressed from castor beans, it is very pale yellow liquid with a distinct taste and odor.

It has also been use to treat a range of medical conditions, most notably digestive issues.

Castor oil is broken down into ricinoleic acid in the small intestine. This speeds up the process of digestion. Although the evidence is less conclusive, castor oil has also demonstrated some potential benefits for the face and skin.

Castor oil and ricinoleic acid are thought to increase absorption in the skin and are sometimes used in the treatment of various skin conditions, including dermatosis, psoriasis, and acne. There are also anecdotal reports of castor oil promoting hair growth, including eyelashes, though no scientific literature that supports this. 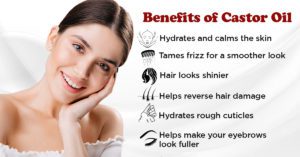 Castor oil  provides the following benefits for the face and skin:

While castor oil contains many chemicals linked to improved skin health, there has been limited research into the dermatological benefits of castor oil. It is more effective to put to use alongside other treatments.

Keeps Your Hair and

Many people use castor oil as a natural hair conditioner.

Dry or damaged hair can especially benefit from an intense moisturizer like castor oil.

Applying fats like castor oil to the hair on a regular basis helps lubricate the hair shaft, increasing flexibility and decreasing the chance of breakage.

Castor oil may benefit those who experience dandruff, a common scalp condition characterized by dry, flaky skin on the head.

Though there are many different causes of dandruff, it has been link to seborrheic dermatitis, an inflammatory skin condition that causes red, scaly patches on the scalp (

Due to castor oil’s ability to reduce inflammation, it may be an effective treatment for dandruff that is caused by seborrhoeic dermatitis.

It can take time for the skin to fully absorb castor oil, but diluting the oil can promote absorption into the skin. People can dilute castor oil with other oils, such as olive or peanut oil. The recommended ratio is 1:1 – the quantity of castor oil should be the same as the oil with which it is mixed.

"Today, I would share a secret for best complete hair & skin care which even I also use & it is extremely effective : it is NEWISH essential oils. Yeh 100% pure, natural & vegan hai & best pasrt is it is suitable for all types of skin & hair. For skin, it acts like a moistuiriser, sunscreen lotion & soothes skin.Mine favoiurite is lavender oil which she uses for complete peace of mind & calm sleep just by adding few drops on her pillow. "

"NEWISH 9 in 1 Newish onion black seed hair oil is a non-sticky, non-greasy hair oil for silkier and stronger hair and its fast absorption makes it perfect for hair Nourishment. It is most effective & recommended for Hair Growth, Anti-dandruff, long hair, hair fall controls, baldness, alopecia, or any type of loss of hair: regular usage continuously for min 30 days daily use would start giving positive results. "

close
Start typing to see products you are looking for.
Shopping Cart
×